Since finishing my outcome for this project, I have been thinking about how I would expand my ideas. The etching is currently just under A3 size, which I personally do not think is big enough. 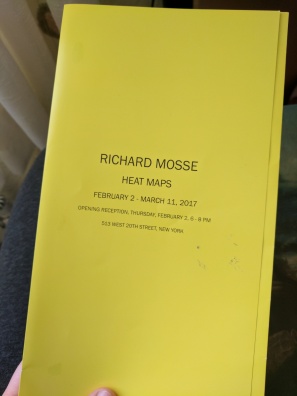 When visiting New York in February, I toured the galleries in Chelsea. This is where I saw Richard Mosse’s  ‘Heat Maps’. These are very large scale photographs taken with a heat detection camera. I was in awe of the effect these images had; the concept behind was already very intriguing, but the massive size adds to the overwhelming impact. This is something I would like to achieve in my own work. I believe that when looking at not just rainbows, but the subject of physics, especially astronomy, this would be significant. With a subject that explores such massive ideas and objects which are particularly out of our reach, the work needs to reflect this.

This is something I would like to achieve in my own work. I believe that when looking at not just rainbows, but the subject of physics, especially astronomy, this would be significant. With a subject that explores such massive ideas and objects which are particularly out of our reach, the work needs to reflect this.

As a conclusion to this term’s and this year’s work, I have submitted two pieces. One is a CMYK photo etching depicting a rainbow projected onto a darkened wall. The other is 11 photographic slides of cloud images which represents the ongoing work ‘The Cloud Project’. I feel that the chosen works accurately summarise my practice in the last year. I have been developing an inquiry into the impalpable and how to bring it closer to the viewer. I have been specifically looking at the sky and clouds, and more recently, rainbows.

The first piece, titled ‘Transitory’ is a photo etching created from a photograph which was taken when splitting light through a prism. I photographed the rainbow in a space with white walls, but no lighting, in order to achieve a darkened background. The image was then split into its four colour layers; yellow, black, cyan and magenta. I then created four etching plates and printed them to reproduce this image. Overall, I am not as happy with the outcome as I had hoped. My aim was to create a print which conveyed the bright, bold colours of the original rainbow, with a saturated, black background to help them stand out. The actual result is a much more subtle rainbow which does not depict the graduation of colours very well. Although I am quite disappointed, the outcome has evidenced that a subject like this has a completely different impact when seen in person than it does when it is recreated. However, what I do believe I have achieved with this piece is the aim to capture something that is only around for so long and place it in a permanent state; in this case in the form of a print. It also represents the nature of these manipulations of light to change. Every natural rainbow we see is different and is vulnerable to time; it only exists for so long before it disappears. In terms of the media I used, the photo etching provided a nice feathered effect which captured the impalpable properties of the rainbow. However, I would like to also try to create the same image through the technique of screen printing, which would allow for less mistakes during inking and hopefully provide brighter colours. I would also like to change the scale of the work to be much larger. 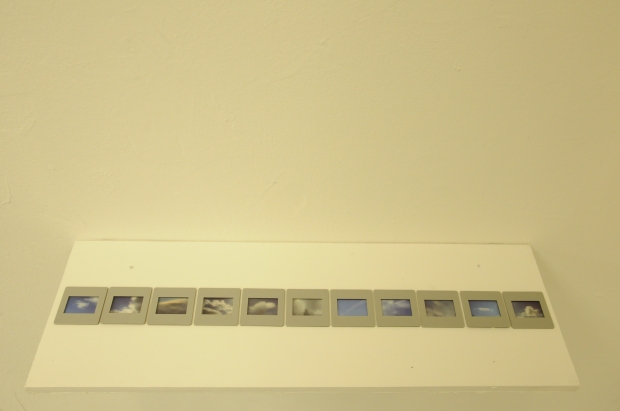 The second submission is a brief collection of images from ‘The Cloud Project’. This is an ongoing project with a final aim of gathering hundreds of images of clouds from different locations and times to form an archive. I am collecting some images myself but have also tried to advertise the project to ask others to get involved; my hope is that I will be able to gather a wider variety of different clouds from different locations. Currently most are from the UK. Recently, I have been thinking about what I would do with the images. I am currently experimenting with the idea of displaying them on a very small scale in the form of 35mm photographic slides.  Each has a handwritten location, date and time in which the cloud was spotted on the back. The goal behind this was to create a way to interact around these clouds and give viewers the ability to hold them in their hand. This means they are able to hold a cloud up to the sky wherever they are in the world and place a cloud from one sky, into another. I am really happy with the concept behind this work and love the way the slides look. My current problem is with the obtaining of images. I am trying to get as many people involved as possible but it is proving to be more difficult than I first thought. I have not had a lot of images and those that I have are mainly from the UK, especially Northampton. I can take images myself but am again limited on the location. This is something to consider as the project develops. Another way I would like to improve the work is to incorporate the categorisation of clouds as it becomes a more archival project. I have taken inspiration from the International Cloud Atlas and have begun briefly looking into different types of clouds. This may find a purpose in the project when I have a bigger collection of images. Ideas of an end goal are beginning to form; I am considering the idea of an ‘exchange’ in which participants could each get a cloud slide from a completely different location – a sort of ‘cloud in your pocket’ idea.

Overall, I am happy with the direction my practice is taking and would like to continue the theme of documentation/archival work. Over the summer, I aim to continue the cloud project and maybe return to astronomical observation and recording.

Spectroscopy is the study of how light interacts with matter. electromagnetic radiation travels in waves, so when these waves hit an object, they produce a change in the particle. The two ways in which they can interact are absorption and emission. By studying these interactions, scientists can discover information about these objects. Astronomical spectroscopy refers to that of celestial objects. The technique can be used to investigate chemical composition, temperature, distance, mass, density and luminosity. It involves the use of the spectrum which i have been exploring in my work, but with very different aims.

‘The remarkably sensitive CCD camera has also become a tool for amateur astronomers, and it has reawakened their interest in spectroscopy. Now a modest backyard telescope can study the planetary atmospheres of Venus, Titan, Uranus, and Neptune, or record the redshifts of quasars at the edge of the universe. The power of the Internet makes it possible to post an observation worldwide almost instantly, invoking a vital and stimulating exchange of news and ideas.’ http://www.skyandtelescope.com/get-involved/pro-am-collaboration/the-revival-of-amateur-spectroscopy/

This is something I am considering looking into for my next project as an extension of my work with prisms. I feel it would be beneficial to develop my ideas beyond the aesthetic and establish a connection to the application of these techniques in the scientific world.

Since starting the cloud project, I found out about the International Cloud Atlas created by the World Meteorological Organisation. Coincidentally, it was in the news recently as it has been updated for the first time in four years. The Cloud Atlas is basically an archive of the different types of clouds that exist; as we have become more advanced and informed about the subject this can expand like it has done this year. Much like the cloud project, it has a gallery of all the images collected and displays the date, time and location, as well as the altitude and longitude. The online archive also allows you to search for specific clouds in specific climates etc. This is really interesting to see the wide variety of clouds; it has encouraged me to consider maybe incorporating this into my work on the cloud project.

Eldridge is an artist similarly interested in the impalpable objects of space and the medium of print. She uses images captured by NASA and reproduces them in 4 colour prints. Her work expresses the incredible advancements in science whilst also ‘trying to comprehend something on the very edge of our imagination.’

This is a photograph of a bubble by Melanie King. Her work is also concerned with ideas of science, especially physics and astronomy. King’s practice has encouraged me to explore the importance of light in mine. 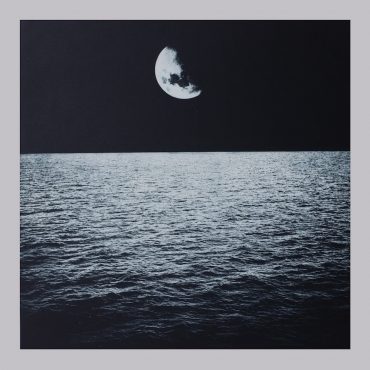 Bennet’s work in project inspired the work with light projected on a wall through a prism. I admire the way the artist manipulates light and uses colour. This piece was brought to my attention last week by a tutor.  It is Cornelia Parker’s screens print of a feather from Sigmund Freud’s pillow. I absolutely love the elegance of this print and it has inspired me to adopt a similar style in my current project. I would like to do a four colour (cmyk) etching of an image of the colour spectrum created through a prism.

This has not been updated in a long time, but in this time I have been working on something new. I have been exploring the colour spectrum. This began when I started noticing the way the light entered my kitchen in the morning and how it refracted and projected rainbows on the wall. This was a great source of inspiration for me. 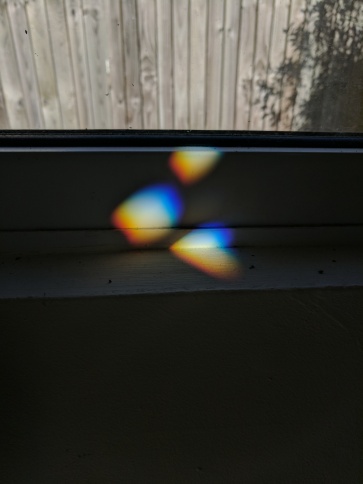 This has led me to experiment with shining light through prisms and capturing the results. Some of the results I have got are successful and I plan to use the images to produce 4 colour (CMYK) etchings. 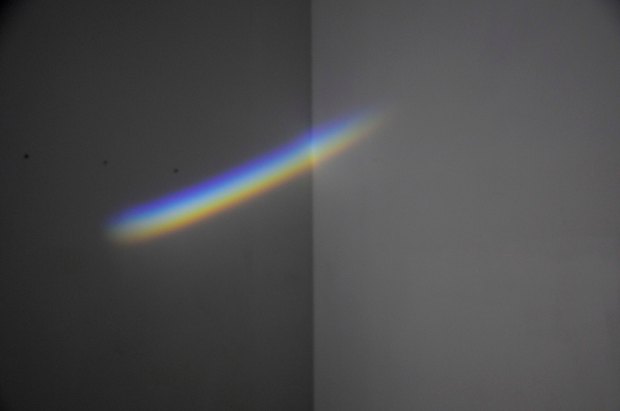